Tattar, Pierce Pull Away, Tied at the Top for USWDGC Final Round

Tattar, Pierce Pull Away, Tied at the Top for USWDGC Final Round 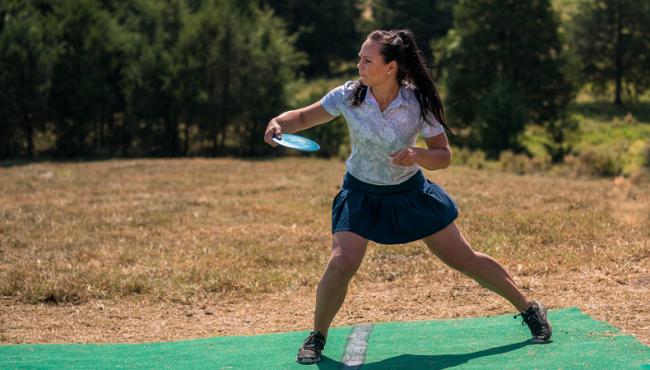 After a grueling day of golf in unseasonably warm temperatures at Hawk Hollow DGC, a two-way tie for the lead has emerged between Paige Pierce and Kristin Tattar, with the rest of the field five or more strokes behind. With only Sunday’s round remaining at Loriella Park, it’s certainly shaping up to be an intense fight to the finish for the 2019 United States Women’s Disc Golf Championship title.

Unseasonably warm might be a bit of an understatement. It was just plain hot. With many of the holes lacking shade, the 95 degree heat index was slowly but surely taking its toll on the players.

“I think the weather is too hot for me to throw a forehand,“ said Tattar, with a laugh. “My hands were so sweaty. I just had to switch it up a bit. I was supposed to throw forehand on a couple more tee pads, but I just wasn’t feeling confident.”

“I’m not used to playing in that kind of heat and the previous two events have been in pretty cold weather. So, it was a bit different but it’s different for everybody.”

Despite the less than ideal conditions, Tattar went on to finish with the hot round, carding nine birdies and two bogeys for a 7-under par 58. Pierce stayed right on her heels and was able to tie it up on hole 17 with a route off the tee that most players would never even consider.

Paige Pierce parked hole 17 with a tricky right-side route off the tee.

It was one of many bold moves Pierce made on the day to make sure she was keeping up with Tattar.

“Even if I don’t win the tournament, this is why I play disc golf, for these battles,” said Pierce. I’m just excited that she’s playing so hot. It’s super motivating to try to contend with.”

Pierce finished with an impressive 6-under par 59, a score thrown by only one other player, Catrina Allen. Starting the day in a three-way tie for 17th place, five off the lead, it was hard to imagine seeing her name on the lead card for the final round. It was easier to imagine, however, after noticing that she carded eight birdies in a row in the middle of the course (7-14), the longest birdie streak by any player in in FPO at an event scored by UDisc Live.

Allen jumped 14 spots and is now tied for third with Paige Bjerkaas, who also made a big move herself after starting on the third card. They’ll both be teeing off with five strokes separating them from Tattar and Pierce with Sarah Hokom, Rebecca Cox, Heather Young, and Becky Harris all within two strokes of catching them on the chase card.

In the Masters Women 40+ division, Switzerland’s Natalie Holloköi threw the hot round to come within one stroke of catching Elaine King. As if King doesn’t have enough on her disc golf resume already, a win this weekend will give her the first ever Masters Women 40+ sweep of the PDGA Majors, as she has already won the Pro Masters World Championships and the Tim Selinske US Masters Championships this year.