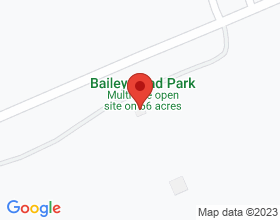 Camping: no
Facilities: yes
Pay to Play: no
Handicap Accessible: no
Private: no
Tee Signs: yes

This was the very first disc golf course I played. As a beginner, this is a perfect course. There are not many difficult holes, and that is fine by me. It is located in a beautiful park easily accessible from the interstate.

** I am rating this course based on its purpose as a beginner family/ youth / recreational player course.

Bailey is a short beginner course layed out in a very pretty park in Cornelius, NC.
Every hole is short and easily accessible for strollers, and children. Every hole is an ace run ranging from 148' to 270'. The ORIGINAL course had multiple 100' straight on throws. The new layout utilizes blind shots on the 2-150' (shortest) holes to add to difficulty. Bailey was designed as a training course. Each hole is designed to practice multiple shots. For example: Hole 1 is a forehand or spike anhyzer (righties). There are lines on almost every hole to practice thumbers, tomahawks, and all variations of back hand and forehand. I play with 1 disc and a putter to practice mid-range and upshots. You can bring an understable mid and throw every hole as an anhyzer back hand or forehand...or just bring a firebird and practice stable back hand, forehand, and thumbers.
Fairways are "fair" there aren't the extra trees that you see on some courses to make short holes harder. Difficulty is added through use of elevation and fairway turns.

Holes in the open are protected/obsured to the left, front, or side by obstacles. Typically these are further than 30' so a poor shot will land you outside the circle. This adds a little difficulty over other small courses where errant or long shots can be knocked down inside the circle.
Even though holes are short, 4's are easy to achieve on a few of the wooded holes.
The course is layed out in a small"ish" piece of property but most of the fairways are apart or separated by dense woods. Greens and Tees are separated so incoming disc danger should be rare. 2 holes where fairway crossing is a potential have blockades set up to protect people teeing off or resting on benches.Shule is not bad. The new design directs discs away from old problem rasberry bush areas. Also, ALOT of brush hogging has been done to make disc finding even easier.

The addition of 5 wooded holes is nice on a sunny, or windy, or rainy day. They are very pretty in mature hardwood forests. This is a great course to get a quick round in after work or on the weekend without taking up hours. This is one of the only NON-private courses for Northern Charlotte Disc Golfers.
The original tee pads are awesome 5' x 12' and probably a little large for the length holes. There are concrete tees at every hole, 5 alternate pin locations, 11 benches and trashcans at 13 holes. There is a 19th hole #11a now to add to the fun. There are metal distance and par signs at every hole.
The course is short. The average hole is 200'. I would say that the advanced or pro player will not feel challenged and will expect a 2 on every hole if not running an Ace. Discs landing in the prickers are considered "lost" to the average rec player. For now some tees are not level. A few trash cans need to be added and benches. Sometimes the course can have large groups of 1 disc rec players, but it is easy to play through. Signage is lacking for now, however, you can see the baskets on 16 holes so it is not necessary. The last 4 holes have longer transitions and are a little confusing until signs are in place and baskets are properly marked. With the popularity of the course at an all time high, crowding will become an issue.
Again, this course was designed to be a training course, beginner course, and a course for the Juniors to play in the 2012 worlds. So my rating reflects how well the course performs to its intended use. It gets a lot of play from beginning players and really has sparked interest in DG, in North charlotte. There are some people that play there after work every single day now that the new layout is open. Attendance used to be about 60 people per day on the old course. Now, an a nice day, you might see 200+ rounds played on a weekend.

The longer holes over 200' tee off from flat ground so if you want the feel of a full run up, you will be able to as the pads will be set into the ground so they can be mowed over.

I have heard that some people don't like losing the >100' hole 1 and 7 and the 427 and 370' holes 3 and 9. You can still play them as Safari golf if play is light. Bailey is going to make a great safari course, and will be great for Glow golf which has been running every Thursday since June 3, 2010.

short course, concrete tees, map on website, course is easy to follow with signs posted throughout the course, tees have info on each basket, definitely beginner course. good mix of wooded and open tees/baskets. water comes into play on several baskets, lots of bugs today around water and tees 6-9. not a lot of walking involved with this course. I gave it a 2 because it is so short and because of all the mosquitos around the water and tees 6-9, but a beginner to the sport may rate it higher and like it better. appeared well kept. map shows extra basket between 9 and 10 but i didn't run by it. There were 2 extra baskets at 13 with a 13A and 13B as well as a 13 basket.