Year Established:
2011
Rating:
2
Average: 2 (1 vote)
4010 High Rock Road
Gibsonville, NC 27249
United States
Challenging 18 hole course with 2 levels of play. The Short (par 57) layout and the Long (par 69) layout. Most holes have 2 baskets except the par 3's which have 1 basket. The long baskets and natural par 3's have black numbers and the short baskets have red numbers. Two separate 9 hole loops have the parking lot and bathrooms in-between the front 9 and back 9. 2018 redesign of the Crooked Creek layout.
Open location in Google Maps 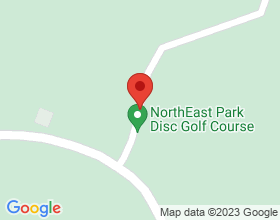 Camping: no
Facilities: yes
Pay to Play: no
Handicap Accessible: no
Private: no
Tee Signs: yes

From Greensboro: US-29N to the Hicone Rd. exit. Right on Hicone, 5.4 miles to a left on Huffine Mill Rd., 1.1 miles to a left on High Rock Rd. and then a right into the park. In the park (ignore any old disc golf directional signs), go to the traffic circle and take the 1st exit. Go past the playground and park in the gravel lot across from the baseball field near the horse corral.
Parking Lot: () 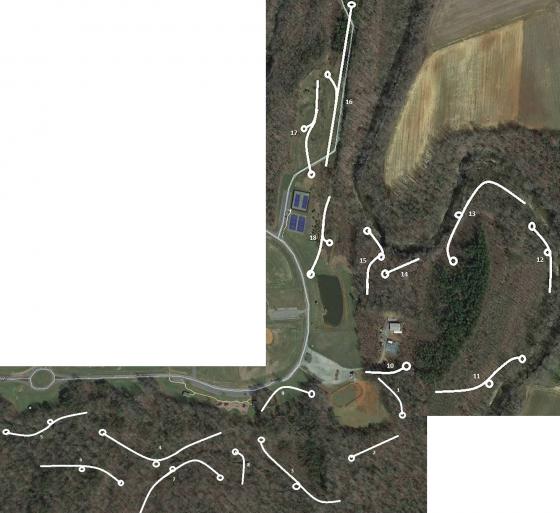 May become a worthwhile course over time, with the addition of tee pads and thinning of underbrush and tree trash. Many tee areas on the front nine and a couple on the back nine are not big enough for pads and fairways intersect walking and bike paths/trails. Number 9 has NO discernible fairway, but if it did, would be a grand side-ending hole. Number 10 is a grand side-beginning hole, except for the design flaw of teeing off out of bounds. Assigned pars as designated on tee signs seem rather arbitrary on several holes. I give it two chains only because I can't give it one and a half and because the back nine, except for the brush trash on #15 and the design flaws of crossing a road and having to deal with a horse trail sign right in front of the green on #12, is, all in all, a good nine. I can only hope that the second 18 hole course that they're talking about installing at the park is better.