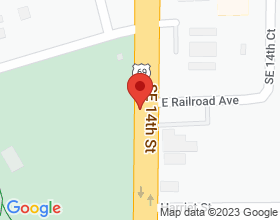 Camping: no
Facilities: no
Pay to Play: no
Handicap Accessible: no
Private: no
Tee Signs: no

This course has no maps.

Pros:
- Centralized location. Set near the State Capitol building off of the main hub of 14th Street in Des Moines, Crivaro is very much an "on the way" course. If you're done with your round at Grandview and want to get in another at Ewing (or vice-versa), Crivaro is smack dab in the middle of your route. Plenty of amenities nearby to fill up on gas, fast food, smokes, drinks, and if you know the right people, some black tar heroin. (Kidding about that last, but the location does kind of strike me as a little sketchy.)

- Good equipment. 9 Mach III baskets are peppered throughout the course, even painted exactly like they are on the Steady Ed Memorial course at the International Disc Golf Center in Appling, Georgia. They catch pretty well, the concrete teepads are grippy and level, and there's plenty of parking. The grass is well maintained in the warmer months as well, making Crivaro somewhat of an oasis among the concrete and blacktop you'll see along the way to and from the better courses in Des Moines.

- Starter course. If you have someone you're trying to introduce to the game, Crivaro is a great place to do it. Holes are short enough (and many have alternate tees) so beginners won't get frustrated, while those newbies who have some Frisbee skills are provided a few holes to air it out without feeling like they're playing on the bunny slopes. A starter DX set from any manufacturer is more than enough for a rank beginner to shoot par on this course. More experienced players will find many ace runs at Crivaro from both the long and short tees. The length of the course and its proximity to a major road with streetlights also makes it a great course for glow during the seasons with shorter days.

- Other activities available. If you want to bring the family and have a cookout, there's a pavilion with restrooms as well as grills available to burn your meat. There's also plenty for the non-golfers to do in the form of a basketball court, swing sets and jungle gyms while you breeze through the 9 or 18 holes. Your round won't take long on this short pitch and putt.
Cons:
- Loud. As I said, 14th Street is a major thoroughfare in Des Moines so traffic is apt to be pretty crazy on that street during your round, regardless of what time you play. 18-wheelers, horns, and bumper-to-bumper traffic can be heard fairly loudly on every hole, so if you like to listen to music while you play your Bluetooth speaker probably won't be enough to drown it out. Better to bring headphones. Suffice it to say that Crivaro is not the course to expect a peaceful round to get one with nature.

- No benches. Though it isn't a long course, its proximity to everything else in the city makes Crivaro a fairly popular park so it can get busy. Its length and location draws beginners and (bless their hearts) bored people sitting around who say to each other, "Hey, wouldn't it be hilarious if we went Frisbee golfing?!" That said, playing here you may end up waiting on people who are trying out the sport with their 40g Met Life Frisbees and grandma's pie tins. Just saying it'd be nice to have something to sit on while you wait your turn watching an eight and 80-year old take 15 minutes to take a 9 on the 110 foot par 3.

- No topless Hooters girls frolicking along the #8 fairway.
Other Thoughts:
All in all, Crivaro is a passable on-the-way course that every town in America needs and can most certainly afford. It gets plenty of usage and is a quick, painless place to introduce new players to the game...especially those on the fence about it who are hesitant to even give disc golf a try. It's a quick 9 (or however many you want to play) that offers a little something for players of all levels, but it's most definitely not a destination course. With Ewing, Grandview, Walnut Ridge, Big Creek and Pickard all being within 20 minutes or so you're better off heading there, but when you have little time and are jonesing for a game this course will scratch that itch. In short, Crivaro is the fat girl at the club at 2am: You wouldn't even consider her if you had time to work the cheerleaders, but when last call comes around your powers of positive thinking start to kick in and all of the sudden the fat girl doesn't look too bad.