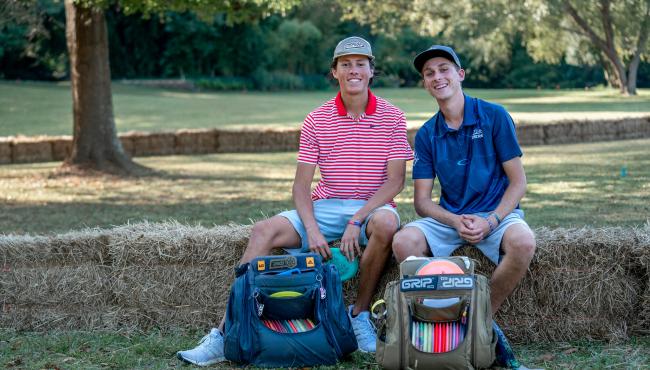 Barela, who is also a former United States Amateur Champion, as well as a Junior World Champion, showed nary a chink in his armor. He led, or was near the top, in almost every statistical category, including 72% Circle 1 In Regulation (1st), 78% Circle 2 In Regulation (6th), and 93% C1X Putting (11th) on his way to a 13-under-par 54.

The only question is, how long can he keep this up?

As long as his putter keeps finding the basket, says Barela.

“I usually have no problem getting the disc in position to birdie,” he told Ultiworld Disc Golf Publisher Charlie Eisenhood on TheUpshot Podcast. “But, whenever my putt’s off, my rounds are not as good as they could be. It’s all just mental. I have putting days where I can’t miss, and then when my mental game is off just a little bit, the putter just doesn’t go in, and I don’t shoot as well as I could. So, it’s all about the putter for me.”

McBeth, the last man to post a score of 54 on this Winthrop Gold layout (2018), has to feel good about his position coming into the second day of competition. Only a blemish on Hole 16 kept him from keeping pace with Barela when his drive clipped a branch and leaked about a foot past the hazard rope.

If there is good news for Barela, though, it’s that 2020 has opened the door for many next generation players to break through at the highest level—not just in disc golf, but in all professional sports. Without the pressure of large crowds, many commentators have observed, newcomers face one less significant hurdle while chasing their first big win.

“I do love playing in front of crowds and throwing big shots,” he told Eisenhood. “The crowd definitely gets me amped up. But, it’s a little bit more relaxing out here.”

Two-time 2020 DGPT Elite Series winner Eagle McMahon is also in the hunt as he finds himself tied with McBeth, and one back of the leader as he pursues the season’s only PDGA Major prize. He was the only player to completely avoid the Winthrop hazards as he slashed his way to a USDGC career-best 55.

Rounding out the lead card for Thursday’s second round will be Isaac Robinson, who got the nod over Chris Dickerson by virtue of his PDGA seniority. They are tied, three back of the leader Barela, at 10 under par. Robinson, who only hit 43% Circle 1 in Regulation, did most of his damage with the putter, connecting on 10 C1X putts and four out of five from Circle 2.

The MPO Lead Card tees off at 2:30pm (Eastern) with live scores and coverage from Winthrop Gold.