Through the Chains: Tips from Pros on their Junior Beginnings

Through the Chains: Tips from Pros on their Junior Beginnings

Six former PDGA Junior World Champions share their secrets to success, longevity in the sport and thoughts on youth play. 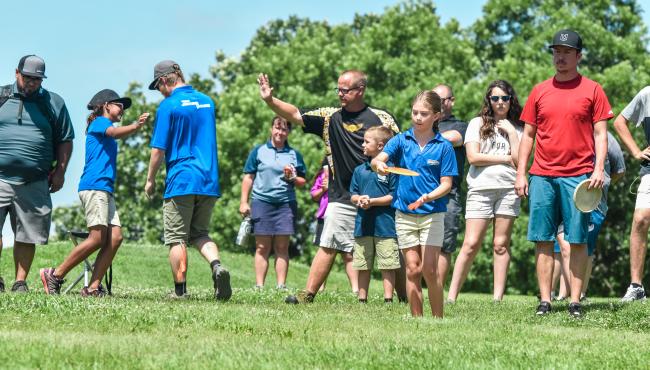 (This article first appeared in the Summer 2020 Issue of DiscGolfer Magazine.)

2020 has given us a chance to reflect on what being a disc golfer means. Why is the game, the sport, so important to us? We have respected our closed courses, mourned canceled tournaments, tours and majors. And now a surge of Juniors must wait for 2021 as hopes of world titles remain postponed or canceled. In honor of Junior Worlds, I asked some past PDGA Junior world champions their secrets to success, longevity in the sport and thoughts on youth play.

Their combined career wins total 466, including 31 majors. Thank you to Nate Doss (‘99), Valarie Jenkins (‘01), Nate Sexton (‘03), David Wiggins Jr. (‘04, ’05, ‘06, ‘07, ‚‘08, ‘10), Paul Ulibarri (‘06) and Paige Shue (‘10). They took different approaches through the PDGA ranks with each playing more than half of their life. At some point, disc golf was a full-time career, full of travel, independence, health, friendship, community and life connections. A disc golf career begins rooted in simplicity and soon life proves thoughtful, mindful and complex. The touring lifestyle is alluring, bewitching and demanding.

Outside with family and friends

According to the panel and a recent survey, the core reasons kids play disc golf are: being outside, family and friends. Those three components make disc golf a perfect family activity, whether it be at tournaments, daily outings, spring breaks or the much-needed travel stop. It appears the best way to get a child playing is to play as a family.

Disc golf started as a family affair for the entire panel. Jenkins and Shue emphasized family as their driving force to begin play. Shue reflects, “I have so many awesome memories of my family and me playing at our home course almost every day for months as a kid.” Jenkins remembers family vacations being centered around playing the World Championships. Jenkins entered competition at 15 and Shue at 11. They sustained the drive, becoming young FPO world champions at 21 (Jenkins) and  22 (Shue). Sam Ferrans remains the youngest Open world champion at 16 followed by Nate Doss at 20.

Wiggins, Shue and Doss started as pre-teens. Ulibarri’s only Junior event was the 2005 Junior World Championships under 16. He finished fourth in a division that consisted of Paul McBeth, James Conrad and champion Devan Owen. The following year, Ulibarri won the Amateur Worlds in a playoff. He scorched the final nine to make up four shots on the leader.

When to move up

Ulibarri began play in a small town, easily becoming one of the best. “I would purposely mess up so that there was more pressure toward the end of my rounds with the locals. I was more comfortable coming from behind because of this.” Ulibarri turned pro after the Worlds win with only eight PDGA events under his belt. At 19, he began traveling coast to coast averaging 38 PDGA events a year. Ulibarri learned to play on tour. “Knowing what I know now, I would have totally changed things. Form, putting stroke, I would have stayed amateur longer. I believe I moved up too fast, with Am Worlds being my first advanced win.”

Like Ulibarri, Sexton started playing in a small town where he also dominated the scene. Sexton took a more regional path to his professional start. After winning the 2003 Junior World Championship under 19, Sexton played the Amateur Worlds the following year. He placed fourth but knew it was time to turn pro. Sexton stayed local, finished his degree and let the tour come to him. In his debut year, he finished seventh in his first National Tour and 32nd at his first USDGC.

Sexton continued to play regionally for the next four to five years. He credits becoming friends with Avery Jenkins and Dave Feldberg for his ability to judge his tour readiness. “I often joke that it was kind of an accident. I didn’t have a clear vision for my future when it came to career path; I went to college and got my degree in Environmental Sciences because that was what interested me most, but all the while I was getting better and better at disc golf. It started as a very serious hobby that I could make a little money at, and slowly became a full-time career for me.

Nate Doss, however, grew up at the famed DeLaveaga, watching and cutting his teeth against the best at the Masters Cup. At only 6-years-old, Doss knew, “I truly believe that I did not want to be but was born to be a professional disc golfer. My mindset was to simply play against and beat the best.

Accepting whatever is meant to happen

Doss is part of an elite group of three players to have won the Open World Championships three times. He also won a Worlds in his hometown of Santa Cruz. When asked about the pressure and desire to win at home, he replied, “I can remember the day before the event, sitting at my favorite beach overlook alone and telling myself that the only way I will be successful is if I can accept whatever is meant to happen. I had never once told myself that. It allowed me to be comfortable and confident.”

David Wiggins Jr., like Ulibarri, Sexton, Jenkins and Shue, used Advanced Amateur World Championships as a benchmark for turning pro. The difference is Wiggins started at 9 years old and racked up five Junior World titles. Wiggins enjoyed years of amateur play across multiple divisions before winning Advanced Worlds at 15 and then turning pro. At 13, he played 31 PDGA events in a year and as an amateur played 47 open events. Wiggins never felt pressure to turn pro and offered this advice when deciding divisions: Typically, I played in the division I was most competitive in until I won a few events. I enjoyed competing in the open division the most because I was playing with the best players, even if I wasn't at their same level yet.

Doss offered similar advice, “Confidence is not given, it needs to be earned at each level with some success. Use each level to prove to yourself that you are ready to move forward.”

Shue enjoyed the women's open division the most but states, "If I could do anything different, it would be to play in more men's divisions. I started winning almost every FPO tournament in my area and I just stayed there. I wish I had tried playing advanced men more. I feel that it would've have pushed me to do better and try new shots. Shue, like Wiggins, turned pro at 15.

Betterment and competitive drive were commonalities throughout the responses. They pushed themselves, riding a thin line between success and burnout. Jenkins states, “Burnout happens when you find yourself going through the motions without any glimpses of change or success.” She combated this by finding other activities that kept her fresh and happy. Jenkins earned a B.A. in Business Marketing while on tour and Wiggins backed off touring to graduate with an engineering degree.

Longevity in sport comes with commitment. Wiggins and Ulibarri advocate stretching before throwing, even if you are a kid. Jenkins and Sexton remember to keep it fun and make the most of every moment. Doss and Wiggins believe in short putt practice. Doss states 30 minutes of uninterrupted practice is better than two hours distracted. Shue, Ulibarri, Sexton and Wiggins like to practice different shot types to develop skills and game plans.

In the end, they were grateful for family support and for starting young. It provided the opportunity to develop skills rapidly and practice constantly. In this crazy year, practice, develop skills and invent games to challenge your play. Juniors, do not fret: disc golf will not pass you by, even if you were a heavy favorite for the 2020 Junior Worlds. Take control of the moment. The best and the brightest stars of the future are reading this article after a practice session. Game on!

Des Reading #15863 is a Disc Golf Hall of Famer, a multiple world and US champion and recipient of the Bob West Sportsmanship and Steady Ed Spirit of the Game awards. She has balanced a 20-year career of competitive golf with teaching and inspiring generations of new players. Des oversees the PDGA’s Youth and Education department.