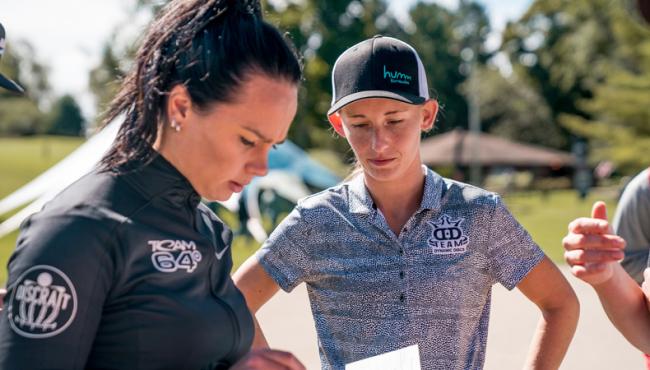 With a lead of one heading into the final round, Paige Pierce has a chance to become the second woman in history to earn three USWDGC titles. Photo: Alyssa Van Lanen

Saturday’s back-to-back rounds at the 2018 United States Women’s Disc Golf Championships saw a constant intermingling of women towards the top of the leaderboard as the 42 holes combined between the two courses played gave way to fast-paced and exciting scoring swings. When it was all said and done, Paige Pierce held on to the lead she had earned the day prior, but with only a 1-2 stroke cushion separating her from Holly Finley, Madison Walker, and Vanessa Van Dyken.

If this situation sounds familiar, it’s because it is. Pierce, Finley, and Walker have played together on the final round lead card of the USWDGC before, just two years ago in Sabattus, Maine in 2016. The one name missing from that group is the one that emerged as the champion, Sarah Hokom. In Hokom’s place for Sunday morning’s final round is Vanessa Van Dyken, who shot four or more better than the rest of the field on Saturday morning’s round on the Renegades Trail course, the same course that will be played Sunday morning with the championship on the line.

“During the first round I felt very calm and not nervous, but ready,” said Van Dyken. “I just focused on the shot in front of me and nothing else. It was just a strong mentality paired with a solid game plan that led to the success of that round.” When the morning round came to an end, Van Dyken’s 10-under par 54 moved her from 12th place into a three-way tie for the lead with Pierce and Estonia’s Kristin Tattar.

Vanessa Van Dyken's 10-under par during round two was four or more better than the rest of the field. Photo: Alyssa Van Lanen

Van Dyken is currently tied for third place with Madison Walker, two off the lead, and handled the limelight of leading a PDGA Major with ease. “Playing on the top card made me nervous, but I did very well to ignore all the distractions and just focus on myself,” said Van Dyken. “The part I failed at during the round was letting myself get annoyed and irritated with all the waiting. We had to wait at almost every hole, which made me feel stiff and tired.”

Catrina Allen rounded out the lead card on Saturday afternoon, three strokes shy of the three-way tie ahead of her. As the day progressed, Tattar and Allen’s position were slowly but surely being ousted by Walker and Finley, who were shredding the course on the chase card.

A five-hole run that resulted in three bogeys and one double-bogey in the latter half of Walker’s morning round left Walker feeling mentally broken, admittedly putting herself into a near “temper tantrum” state of mind. “When those holes happened, I had a pretty poor attitude and felt like, ‘Well, there goes the tournament,” Walker said. “Not that I gave up, but once that pressure is off, then you feel like, ‘Oh, well now I can just relax and play disc golf’, so I did, and it got better.”

“I realized that what I was lacking was not my game, it was my mental game,” Walker said. “I told my caddy before the second round, ‘I am not allowed to whine or dwell, at all, about my previous shots. I cannot talk about them, I can’t think about them. DON’T LET ME DO IT.” 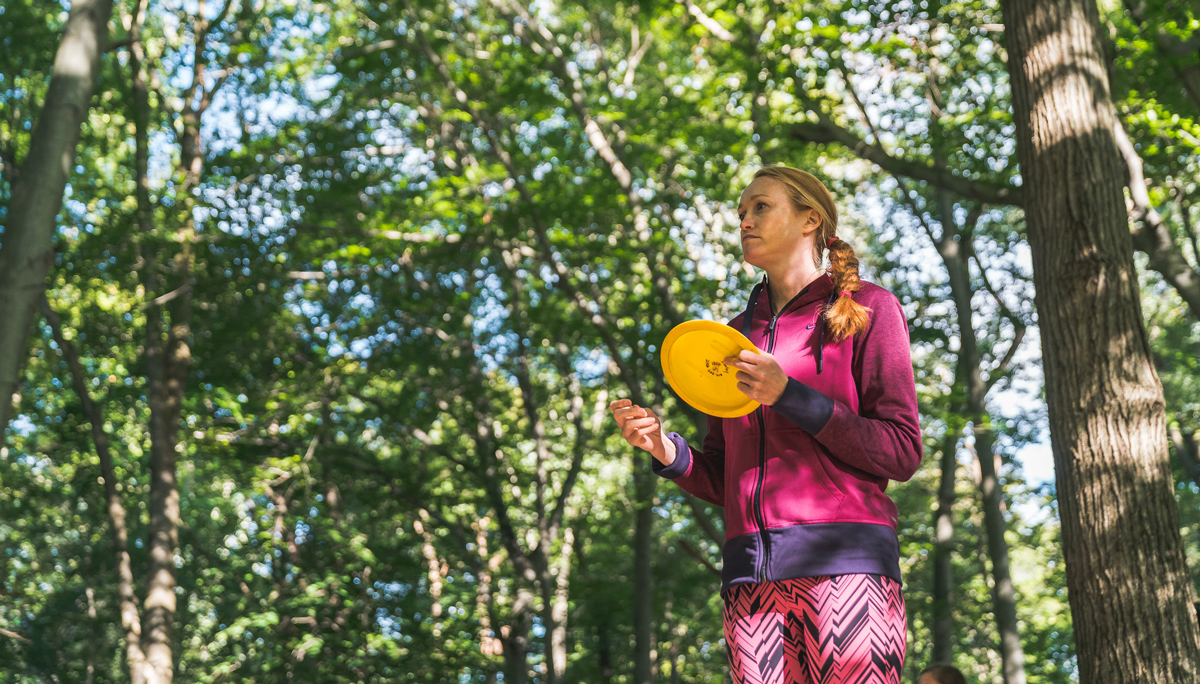 Holly Finley currently sits in second place, one off the lead, heading into the final round. Photo: Alyssa Van Lanen

Whether or not her caddy followed her orders, we can’t say for sure. What we do know is that Walker and Finley both went ham, pushing each other to finish the round with a combined 20 birdies and turning in round scores of a 9-under par 54 and a 7-under par 56, respectively. Finley has played fantastic, and perhaps more importantly, consistent golf all weekend, and now sits just one off the lead, one ahead of Walker and Van Dyken.

There is another story brewing here in Lansing which is the potential for Pierce to not only take down yet another PDGA Major win wire-to-wire but a chance for her to become the second woman to earn three USWDGC titles. Since its first running in 1999, only Des Reading has pulled it off, and she did so with a threepeat from 2002-2004. Pierce finished six ahead of Val Jenkins in 2014 in Augusta, Georgia to earn her first and followed it up three years later with another six-stroke margin victory in Johnson City, Tennessee in 2017.

The 2018 USWDGC final round begins at 8:30 a.m. EDT on Sunday morning. Follow the live scores and updates on pdgalive.com and stay tuned for video coverage from Jomez Productions and The Disc Golf Guy.