Hokom, Allen, Tattar knotted up in second, one stroke behind 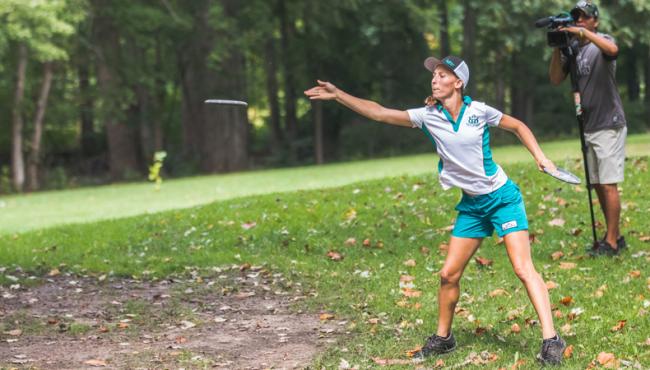 Paige Pierce putting on the River's Edge course during the opening round of the 2018 USWDGC. Photo: Alyssa Van Lanen

With the gallery and camera crew at her back, defending US Women’s Champion Paige Pierce teed off on hole 1 of the Rivers Edge course and crushed her driver…directly into a tree, just a few feet out in front of the tee pad. The disc kicked left and hit the ground quickly, coming to rest on an out of bounds sidewalk. Being the champion that she is, she brushed it off and finished the hole with a double bogey to start her round. It wasn’t ideal, sure, but it didn’t stop her from shooting the best round of the day with a 3-under par 67 that included six birdies and an incredible throw-in eagle on 17.

The opening round of the US Women’s Disc Golf Championships (USWDGC) saw the professional divisions taking on the longest of the four layouts they’ll play throughout the weekend, River’s Edge Long. With 21 holes and an average distance of 355 feet, the ability to throw far is helpful, but only to a certain point. A majority of the course is heavily wooded, making many of the shorter par 3 holes difficult and the longer par 4 holes even more difficult.

Only four from the Open Women’s division finished under par on the day and they’ll make up the lead card for the first of two rounds on Saturday. Sitting just one stroke behind Pierce are not one, not two, but three world-class competitors: Sarah Hokom, Catrina Allen, and Kristin Tattar. The stats tell the story, as Pierce had the most success hitting the fairway off the tee and gave herself the most opportunities for birdies by making the green in regulation more often than anyone else on her card.

Both of Saturday’s rounds should play quite differently than the day prior. The professional divisions will take on back-to-back short layouts, playing Renegades Trail first in the brisk temperatures of the morning and then returning to River's Edge in the afternoon on a layout 1500 feet shorter than what was played on Friday. Most of the top players will be looking to light it up in the morning, as the Renegades Trail course has several "birdie or die" holes to take advantage of.

With help from volunteers and caddies, live hole-by-hole scores should be up and running for at least the top cards. Follow along on pdgalive.com as the fight for the title of 2018 USWDGC champion continues here in Lansing, Michigan.