The second annual US Junior Disc Golf Championship is in the books and twelve new junior champs have been crowned! The USJDGC, run by Kids Disc Golf, enjoyed beautiful weather through the weekend at Smugglers’ Notch Resort in the heart of Vermont’s Green Mountains. The resort provided a perfect setting for families to enjoy high-level competition on two elite courses at the Smuggs Disc Golf Center, as well as a great family atmosphere where competitors can stay on site and get to know each other, with many competitors forging friendships before the end of the event. Kids Disc Golf’s slate of events and activities outside of competition were the perfect touch for a well rounded weekend in Vermont.

The atmosphere was great, but the performances and competition from the field of junior disc golfers was even better. The players treated parents, staff and spectators to numerous hard-fought on-course battles, with many divisions coming down to the final hole of competition!

Our recap will start with our youngest competitors, the 6 & Unders! Katherine Nunn-Gage played well all week to earn the FJ6 title and Rivers Reese cruised to the MJ6 win over Asa Fonseca and Zachary Quinney. It was incredible enough that these young disc golfers were able to complete the long and grueling courses, but our MJ6 winner, Reese, was able to shoot even par from the closest tees! In the 8 & Under divisions, the FJ8 title went to Cascade Reif Matoney and Kaidin Bell continued to distance himself from the pack on his way to the MJ8 title over Carter Grayum, who finished in second place. 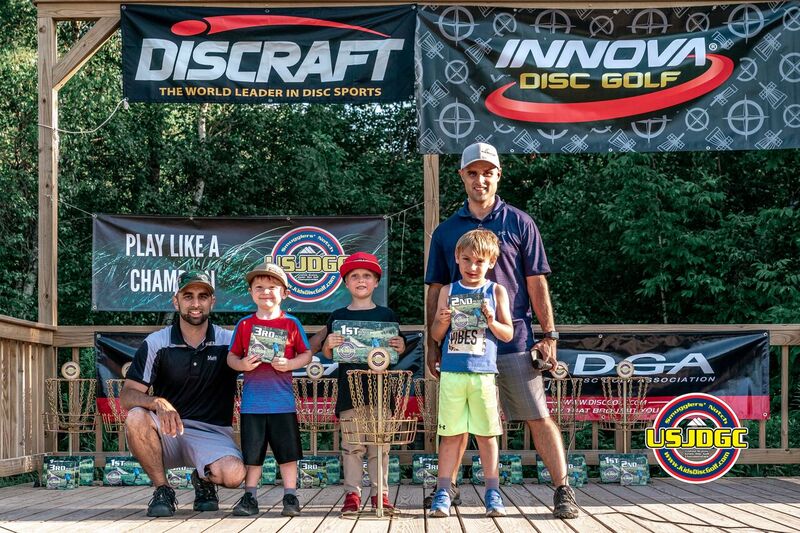 While the youngest divisions didn’t come down to the wire, the competitions in the 10 and under divisions were extremely close! Wyatt Mahoney, 3x Junior World Champion, had spent the first two rounds building a two-stroke lead over Uriyah Kelley. That was quickly undone after Mahoney carded a bogey four on hole two, while Uriyah birdied to tie things up. That was the start of a hotly contested, back-and-forth round that saw three ties and four lead changes between the two competitors! It all came down to the final two holes where Kelley had flipped the script and had a two-stroke lead of his own. However, after his tee shot sailed OB, Mahoney stepped up and placed a perfect drive next to the basket. His ensuing birdie paired with Kelley’s bogey meant that the two would go to 18 tied. With the pressure on, Mahoney stepped up and birdied the final hole to claim a one-stroke victory over Kelley, who showed incredible resilience all week to hang in there, almost completing the comeback!

The FJ10 division was also close! Aubrey Violet staked herself to a four-stroke lead after round one and was able to hang on to that same margin coming into the final round. Rosemary Marr would not go away quietly though! Marr spent the front nine, chipping away at Violet’s lead until she was within just one stroke after 10 holes! Violet would not be denied though, gaining back the strokes she lost and more with a three-stroke swing on hole 11 and costing to victory with solid play throughout the back nine.

MJ12 was a tightly contested division all event long, with three players having a real shot to win going into the final day and a tie atop the leaderboard between Pete Kozlowski and Griffin Swinburne. Kozlowski turned on the jets early and raced out to a big lead. Although Swinburne tracked him down, it ended up being too little too late as Kozlowski hung on for the one-stroke victory. In FJ12, Alexis-Julia Craveiro looked to be within striking distance of Skylar Poquette, but Poquette proved to have the advantage on Fox Run and extended her margin of victory over the course of the final round. 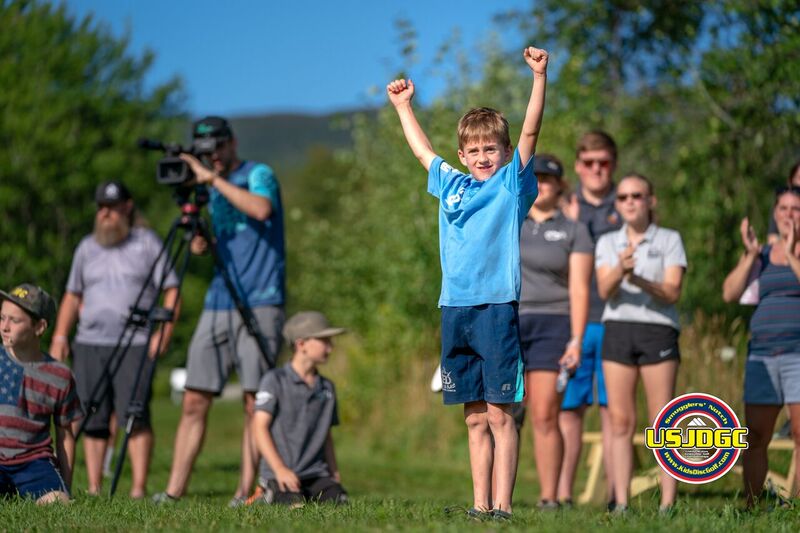 The same pattern of victory applied to the FJ15 division, where Lilly Ruthen bested Emma Partee by five strokes in the final round to win comfortably after the two battled back and forth during the first two rounds on Brewster. In MJ15, the closest battle of the week unfolded in dramatic fashion as Oregon native, Cole Redalen charged from third card with a 976 rated, even par 63. Heading into the round, there were 10 players who had a chance to win! It came down to the final hole as two players from lead card, Mikey Barringer and Lucas Oberholtzer Hess, clung to a one-stroke lead over Redalen. The leader in the clubhouse looked on as Hess found OB to open the door. Barringer, however, kept it clean on 18 and was able to convert his par putt for the one stroke victory over Redalen and the MJ15 Junior Championship!

In the oldest division, Lily Marr, winner of last year’s FJ15 division, added another title to her belt taking home FJ18. The MJ18 division looked like a three horse race going into Sunday. Fox Run claimed one of the three competitors chances early on as local Vermonter Tom Shanley found trouble on the front nine. The race for the title then came down to Round One leader Timothy Lutz and Round Two leader Elijah Bickel. Lutz pulled within one after gaining six strokes on Bickel through the first 5 holes! Elijah, however, was not to be denied as he slowly rebuilt his lead and took home a six stroke victory

It was another amazing week in Vermont, this time executed to perfection by Kids Disc Golf and event partners Eagles Wings Disc Golf and Disc Golf Vermont! The event team wants to thank all sponsors and partners for the support of the event, especially the Gold level sponsors Innova, Discraft, Upper Park Designs and National Life group. Stay up to date with all things Kids Disc Golf by following them on social media. The United States Junior Disc Golf Championship will continue to grow for years to come! Next up for the Smugglers’ Notch Disc Golf Center, during a year jam-packed with big events, is Discraft’s Green Mountain Championship, the final stop on the Disc Golf Pro Tour this September 12-15.