Your Membership Dollars At Work: 2019 In Review

Your Membership Dollars At Work: 2019 In Review 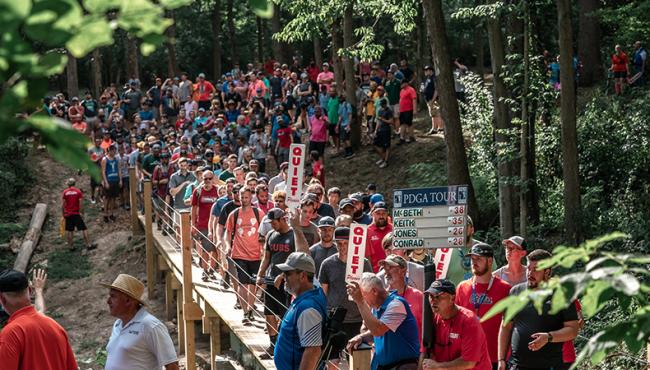 2019 marked another big year of growth in disc golf, and the Professional Disc Golf Association is out with some impressive new numbers to prove it.

Following recent trends, active PDGA memberships continued to grow at a 15% clip, bringing the total number of active members above 50,000 for the first time. Other measures took even greater leaps, such as the number of PDGA-affiliated clubs, which saw a 35% bump.

"Disc golfers are an eclectic group of individuals with a variety of opinions, and this is one of the biggest strengths for a membership-based organization – their feedback," he said. "The growth of the PDGA over the last decade is directly aligned with the collective and independent actions from the individual disc golfer, disc golf clubs, event organizers, manufacturers, and other disc golf industry-specific businesses. Their actions and ideas have the most impact on the growth of the number of PDGA members."

Events, meanwhile, were another bright spot. First-time PDGA-sanctioned tournaments were held in several new countries, including Malaysia, Mexico, Singapore, Vietnam, and Zambia. The total number of sanctioned tournaments -- a record-setting 4,563 -- took place in 43 nations on six continents. And if that wasn't enough, more places to play are going in the ground seemingly each day: The PDGA course directory now lists over 8,843 courses in 71 countries.

Back in Appling, Georgia, at the PDGA’s International Disc Golf Center, a core of dedicated staff lives and breathes “grow the sport” while putting membership dollars to work. Last year, on behalf of the PDGA and its members, EDGE facilitated 40 educational grants designed to cultivate the next generation of disc golfers by bringing the game to students and educators. The events staff logged over 17,000 miles with the PDGA trailer to support several world and national championship tournaments, along with six PDGA National Tour events. The media department stepped-up its game with a regular stream of professionally produced articles, podcasts and videos, and the organization's technology team rolled out the new PDGA Digital Scorecard that makes scoring rounds a breeze.

"One of the most important, and sometimes overlooked, resources for growing the number of active members is the small, but growing number of staff members at the PDGA," Allen said. "Volunteers are a huge part, too. State, Provincial, and Country Coordinators, and hundreds -- if not thousands -- of other volunteers and ambassadors are the true resources having a direct impact on the game."

None of this is possible, though, without the overall support of PDGA members, who also realize several other advantages from their annual membership. In addition to player ratings, members also receive a quarterly copy of Discgolfer Magazine, which last year distributed to more than 45 countries; a free UDisc Pro subscription; liability coverage for PDGA-sanctioned events; and — new for 2020 — a 50% discount off the monthly subscription price of the newly-launched Disc Golf Network.

"The benefits of a PDGA membership are becoming more digital as we advance the sport to enhance the recreational and competitive disc golf experience on and off the course," Allen added. "Whether it is finding the course with UDisc or watching the coverage of elite series events online, the PDGA is always looking to improve its membership options, benefits, and services."

Indeed, never before have there been so many great reasons to join the PDGA. Members can enjoy these benefits, while at the same time knowing their dollars are being put to work to drive the PDGA’s core mission of developing disc golf into a globally recognized competitive sport.