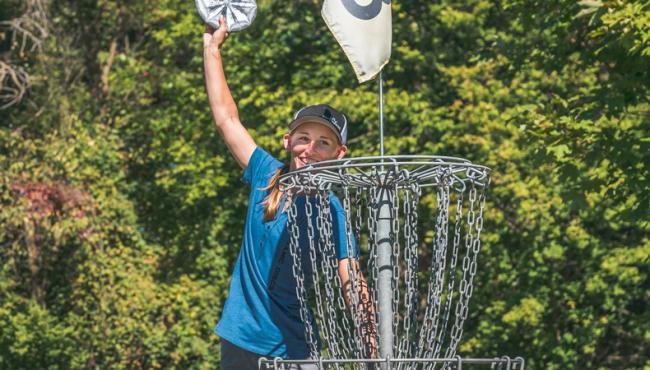 With dew from the grass flying off their shoes, 162 women made their way to the tee pads for the final round of the 2018 United States Women’s Disc Golf Championship Sunday in Lansing, Michigan. At the top of the Open Women’s leaderboard was Paige Pierce, and it would remain that way.

After a heated 21-hole back-and-forth battle with Holly Finley and Vanessa Van Dyken, Pierce earned the title of three-time United States Women’s Disc Golf Champion, a feat only one other woman -- Des Reading -- has accomplished.

In the end, Pierce’s 5-under par 61 on the longest configuration of the Renegades Trail course was just enough to keep her ahead of the chasing duo with a 17-under par 246 total, while Finley and Van Dyken finished their weekends at 15-under. Kristin Tattar took home fourth place with an 11-under par 252, while Catrina Allen and Zoe Andyke shared fifth place with 9-under par totals.

Though Pierce ended up atop the podium, there wasn’t a worry-free moment during any part of the four-hour battle that unfolded. Just two holes in, a bogey by Pierce meant she would already be sharing the lead with Finley, with Van Dyken only one behind -- not to mention the likes of Madison Walker and Tattar, who were now within two, breathing down her neck.

Pierce, Finley, and Van Dyken went shot-for-shot for the six holes that followed, and Pierce wouldn’t regain the lead until the hole 9 (course hole 7), a 640-foot par 4 that saw only three birdies the entire day. One of said birdies, of course, was carded by Pierce, with a 50-foot putt to cap it off. It was a crucial turning point of the round, as she would never be caught again for the 12 holes that remained. But it was the tap-in birdie on the tricky par-3 that followed that may have been the nail in the coffin. But that's only in hindsight. Pierce knew there was still a lot of golf left, and stayed on her toes.

Finley and Van Dyken continued their efforts to catch Pierce, but for every stroke they gained they gave one back. With Pierce still up by two and a drive that left her putting from 30 feet on 16, her goal of a three-stroke lead heading into the island hole 17 was attainable if she could sink the putt.

"If I made that putt, I thought I'd won the tournament," Pierce said. "It went in the basket but didn't stick. It wasn't a spit-out by any means, it just kinda teeter-tottered on the rim for a second. So, yeah, now I felt like if I didn't land in bounds on the next hole I was only gonna be leading by one stroke at best going into 18."

After taking the par on 16 with the rest of the group, Pierce watched as both Van Dyken and Finley landed safely on the island. Fortunately for Pierce, she did as well. All three of them made their birdie putts, but Pierce was so confident that she wouldn't lose a stroke to anyone on the final hole that she toyed with the idea of not even going for the birdie putt to the elevated basket, despite it being only 25 feet.

Pierce seals the deal with a birdie putt on hole 17 during the final round of the 2018 USWDGC.

"I actually considered laying up," Pierce said. "I air-balled the putt the last time -- it was a headwind putt, and it lifted over the basket and almost went OB. I had that putt in my brain a little bit, but I had been putting good all weekend and I felt confident and decided to go for it."

With only the 18th to go, Pierce's game plan had paid off. Finley and Van Dyken were knotted up in second place, two strokes back, and all she had to do was finish with a par to win. And she did, with a quick pitch from her monstrous drive to under the basket for a tap-in.

"It was such a battle," Pierce said. "When Holly made that putt on 10, I knew I had to step it up. And Vanessa, she was so fun to watch. She didn't even come close to missing a putt. Every single time she hit the basket it was right in the heart, the perfect height, everything. Amazing."

After finishing in eighth at Pro Worlds and second at the Delaware Disc Golf Challenge, Estonia's Tattar has used her stateside trip to continuously show that she is one of the best in the world, grabbing the fourth place spot at USWDGC. Allen and Andyke, in a close race of their own, turned in a 2-under 64 and a 1-under par 65, respectively, to finish tied up for the fifth place spot.

In the Pro Masters Women 40+ division, Elaine King continued adding to her already legendary and nearly untouchable disc golf resume with another win at a PDGA Major, and did so with style, finishing with a 9-under par 254 for the weekend while playing the same layouts on the same days as the Open Women's competitors. Had she competed in the Open Women's division, that score would have put her with Allen and Andyke for a three-way tie for fifth. King has now won 259 PDGA events since becoming a member in 1985, including seven Professional Disc Golf World Championships, two US Masters Championships, and now three US Women's Disc Golf Championships.

Thank you to all of the record-setting 162 women that came out for the 2018 United States Women's Disc Golf Championships, and congratulations to all of the new USWDGC champions!

Tattar also finished 3rd at the European Championships in mid August behind Europe's top 2 ladies - Henna Blomroos and Eveliina Salonen of Finland both of whom are still in their teens ...