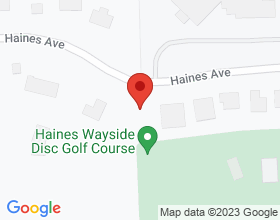 This course has no maps.

Been redone a bit and now the course is getting a bit sloppy. Also really hard to follow, and hate that it plays two holes to one basket...... And the little river there is filled with nasty slug from the water treatment plant.... Probably won't go back.

This course has a few problems, but isn't terrible. You can follow the flow without a map, but some of the baskets are older, and a bit rusty making them hard to spot from the tee in you're not already familiar with the course.

The problems (as I see it).

1. A couple of the early holes have their baskets very close, within 10' or less, of the water with nothing to stop an errant or even well thrown approach from skipping, rolling or otherwise getting irretrievably wet. We resorted to having the some players play "goalie" (standing behind the basket and stopping discs before they reached the water) while others shot, but even that's not a great solution as there is very little margin for error.

2. There are no signs. While there are sign posts, they are either blank, hand drawn (some incorrectly), or have (vulgar) graffiti all over them.

3. There are no tee pads. Cement markers indicate the (front of the) tee area, but you're throwing off of dirt... mud if it's been raining.

4. Most of the holes are short, some very short, one or two are very very short.

5. There seemed to be a lot of broken glass bottles and beer cans in the wooded areas despite there being many garbage cans located throughout the course. Also some graffiti scattered about.

I could deal with 2, 3 and 4, but no. 1, the baskets being so (really really) close to the water is a deal breaker for me, and the general disregard of maintenance in the wooded areas just left a bad taste in my mouth.

It would be a nice, though short, course with just a few tweaks. Move a couple of the baskets further away from the water. Lengthen a couple of the holes by moving the tee area back. Fix the signs and clean the woods and you've a nice little something here. Until that happens, I can live without it.