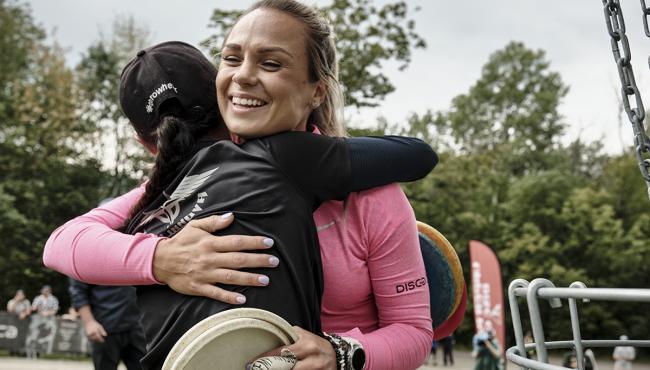 Standing on the spot where the 2023 PDGA World Champion will be crowned, Kristin Tattar spoke about living her dream.

She’s two weeks in as the reigning World Champion and in the middle of an incredibly dominant season in which she added another trophy to her collection on Sunday at Smugglers’ Notch, Vermont.

Tattar finished her fourth event of the season with an average rating of over 1000 as she grabbed the win with a strong final day at the Disc Golf Pro Tour Playoff – Discraft’s Green Mountain Championship.

“This is what I’ve been dreaming of, and it’s here,” Tattar told Zoe AnDyke of DGN. “I’m just trying to enjoy every moment of it.

“It almost brings me back to Worlds. All the same competitors are here and they’re the best in the world. It means the world to me.”

With the win, which ended up being a seven-stroke victory, Tattar has now won the last four events she’s entered — the Des Moines Challenge (ES), Pro Worlds, Butler County and GMC, the site where she first competed in a World Championship in 2018. PDGA Pro Worlds will return to Vermont on Labor Day Weekend in 2023.

Starting the day at Fox Run Meadows, it was a two-player race between Tattar and Henna Blomroos as once again, just like at Worlds, the two European players had separated themselves from the rest of the field.

The beginning was tight — back and forth — before Tattar took the outright lead on hole 6 and didn’t look back with a 4-under round, the best in the field by two strokes.

Tattar led the week in strokes gained putting (10.72), according to UDisc, was first in OB rate and hit on 33% of her circle 2 putts.

Blomroos, who is turning it on at a pivotal time of the season, was dominant off the tee with an incredible 23.50 strokes gained tee-to-green, nearly 10 more strokes than second place in that stat category.

But this weekend, once again, belonged to Tattar.

The GMC also kicked off the inaugural DGPT Playoffs, a two-event series where points are weighted higher and have a great impact when it comes to seeding in the bracket-style DGPT Championships in October.

Here are some of the biggest movers of the weekend and who is on the bubble heading into the MVP Open at Maple Hill: